Digital Bug Out Bag: A Nerd and His Family Running From a Hurricane 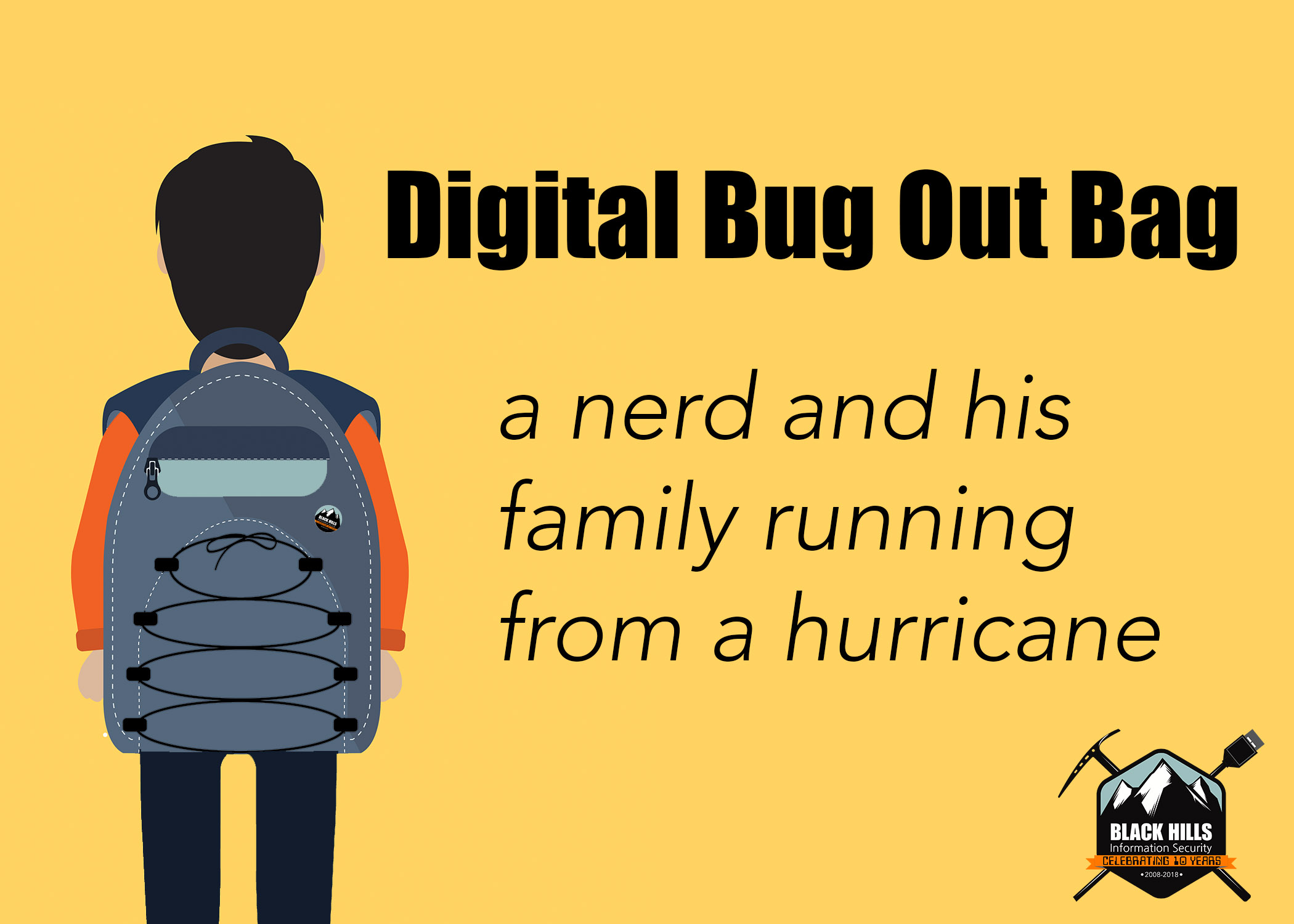 I live in an area that was initially projected to be hit by Hurricane Florence. Four days prior to the storm making landfall the governor of my state issued a mandatory evacuation for the zone that I live in. The floor of my house is about nine feet above sea level and there is a ditch in my backyard that fills up when tidal flooding occurs. During a hurricane that stayed offshore a few years ago, this was someone kayaking through my backyard during high tide. The reports were that the storm could bring a 13 foot plus storm surge, the picture above was 3 feet above normal high tide, so it seemed plausible that we could get flooded. All part of the joy of living on the coast!

My wife and I had rode out hurricanes and “nor’easters” in the past (for those not on the East Coast sometimes the nor’easters can be as bad and even worse than hurricanes). If it were just us, we may have stayed, but with two kids, we decided leaving was a better idea. Our plan was to find a hotel inland a bit, away from the flooding, but not too far so we could have a better chance of making it home right after the storm to get to work on cleanup and recovery. Time to pack up a bug out bag!

But what to pack? Since the family (wife, two kids, and pets) were headed to an inland hotel, shelter was taken care of. Our main concerns were power for devices, communication, lighting, and water. When my wife and I stayed put for Isabel in 2003, the conditions were similar to what was happening with Florence, a lot of rain all summer making the ground soft, and leading to a lot of downed trees and powerlines.

Back in 2003, power was important for sure (I remember borrowing battery backups from the servers at work) but our lives are even more dependant now on digital devices especially for communication. These days, if your smartphone dies, you’re not going to easily call anyone. I can’t remember the last time I saw a pay phone in my area! For emergency purposes, this is probably the most important item in the bag though it probably really lives in your pocket.

Also, I thought it would be a good idea to keep devices that would keep the kids’ minds off the emergency such as their Nintendo Switches and cell phones (yes, my kids already have cell phones).

As with the Physical Pentest Gobag talk from 2017, I used the 36 liter version of the GoRuck GR2. That’s generally the bag I use for travel and it has plenty of room and it comfortable to carry. Also, I am pretty sure it is bomb proof. For communication related devices I packed the following:

I figured that if the power did go out, I would be able to tune into radio stations with the Grundig FR200, its out of production (I’ve had it a long time). But similar radios are not that expensive. Plus it can receive some shortwave signals and has a hand crank and rechargeable battery.

I threw in the Baofeng two way radio just in case if it did get really bad, there may be repeaters around that were still functional (I had preprogrammed some repeaters on the radio with Chirp, plus had a relatively recent repeater directory in my truck).

The WiFi hotspot is something I usually take on travel anyway because I am usually untrusting of wireless networks and use my own if I can help it.

For power related items I had a collection of micro usb, lighting, and USB-C. There seem to be more that necessary in the picture – that’s’ because I had cables for my wife’s and kids’ devices as well as I figured that they may potentially forget to bring some – my youngest brought eight Barbie dolls when I told her to go pack up items she thought were necessary and essential!

In addition to the cables I had a Belkin travel surge protector with two USB ports and three outlets on it. I thought this would be enough to keep devices and batteries topped off with charge while there was still power. Combined with some other wall warts, this turned out to be the case for the most part. But the outlet above the table in the hotel room did look similar to the Clark Griswold Christmas Vacation lighting outlet for the trip. I packed two 10000 mA battery packs and a folding RAVPower folding solar panel with two outputs. I used the solar panel on a past hunting trip and it was able to mostly charge the battery I had at the time during the course of the day. The Dark Energy Poseidon battery pictured above seemed to be able to charge my iPhone two times when full.

Keeping devices charged was an issue even with power, though if it came down to it, some of the less critical items (like the Switches) would have to wait in line behind phones.

All the devices that could be charged (and I may be missing something) :

The next time around I would likely bring two small power adapter extension cords for the power strip to make room for larger adapters if I needed to.

I also brought a GoPro Hero 5 because I thought it would be good for documentation if necessary as well as a lightweight backpacking tripod, extension stick, and head mount. I was in the middle of a good book, so I brought my Kindle Oasis along too.

Two important items that thankfully did not need to be charged were a headlamp and Surefire flashlight (spare batteries were in the truck). The kids and wife also had flashlights in their bags.

I also brought my Thinkpad Carbon X1. Hey, computer geeks are going to bring computers right? It is the lightest computer I have ever owned, and claims to have some level of protection against the elements, not that I have ever purposely tested that.

Just in case I had to walk in the soaking rain for any length of time, I brought a North Face rain jacket (not pictured) and LOKSAK bags for the laptop and other electronics. I also had a Columbia River Tools pocket knife – a knife always comes in handy.

Lastly I brought two collapsable Platypus 1 liter water containers. Even though we had bottled water in a cooler, I like these because when empty they weigh very little and are reusable.

In the end, the storm thankfully missed my area and went further south. I say that knowing full well that my good fortune meant that someone else did not have the good luck to not get hit by a major hurricane. Both the event and the aftermath are terrible experiences to have to go through and I wish everyone affected the best of luck with recovering from it.