Intro to Cryptocurrency and How to Secure Your Coins 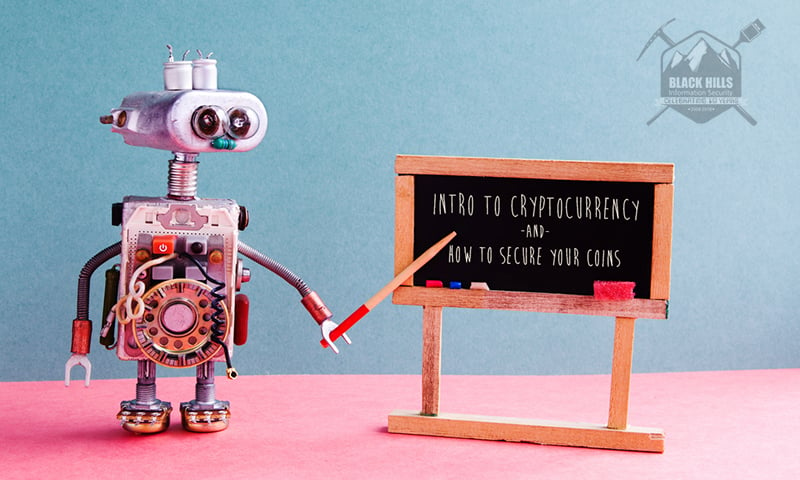 This blog post is meant to serve as a basic introduction to the world of cryptocurrencies. With cryptocurrencies making their way into mainstream news outlets I am getting asked more and more about it. People that I had mentioned Bitcoin to back in 2013 are coming out of the woodwork to ask about it, now that it’s getting so much attention. This blog is going to cover how to get your first coins and how to securely store them. Possibly two of the most important aspects of cryptocurrencies are that there are many different ones, and that not all of them are in fact meant to be “currencies”. As of today, March 27, 2018 coinmarketcap.com lists 1,589 different cryptocurrencies. A large number of these coins are meant to improve on current monetary systems. Bitcoin being at the forefront has dominated the market, but there are plenty of others that are attempting to achieve a similar goal. Litecoin, Ethereum, and Ripple are each similar in that they are attempting to solve global issues with the transfer of money. Many of the other coins (and tokens) have very different goals and technologies backing them though. Many people who are jumping into cryptocurrency are mainly doing so because of the speculative nature of it, and they are hoping to make some gains off of investment. I think that there is definitely potential for monetary gains, but more importantly there is potential for technological gains. Specifically, ‘blockchain’ is the underlying piece of technology that Bitcoin and other cryptocurrencies are running on top of. More on the blockchain in another post… let’s get to the part where we buy some coins!

Join an Exchange and Purchase Coins

Coinbase by far is the most popular exchange used by many of those just getting into cryptocurrency. At the present date you can sign up on Coinbase and buy either Bitcoin, Ethereum, Litecoin, or Bitcoin Cash with a debit card or bank transfer. If you are looking to quickly jump into cryptocurrency I’d recommend signing up here and buying your first coins. One thing to keep in mind is that for all cryptocurrencies you don’t have to buy them in whole number format, meaning you can buy very small fractions of each coin. For example, you don’t have to buy one (1) Bitcoin to own Bitcoin. You can purchase Bitcoin out to the eighth decimal place like this: 0.00000001 BTC. Fun fact: 0.00000001 BTC is referred to as “1 Satoshi”. This means that if you want to buy $20 worth of Bitcoin you can.

How you became interested in cryptocurrency can drive what coins you wish to purchase. Bitcoin has recently had very high transaction fees along with long wait times for transacting coins making it not the best for quick payments. If you are interested in the using cryptocurrency as a daily-use payment method you might be more inclined to acquire something like Ethereum or Litecoin instead of Bitcoin, since their fees are lower and are relatively fast. If you are interested in maintaining anonymity and are more privacy focused, then coins such as Monero, ZCash, or Verge are for you. These coins will require you signing up on a different exchange such as Binance to trade Bitcoin or Ethereum for these. If you are more interested in a store of value, Bitcoin might be the choice for you as it has historically been the center of the cryptocurrency world. When Bitcoin price rises so do others, when it drops everything else does.

Rule #1 of cryptocurrency is: Don’t leave your coins on an exchange.

Ok, so what does that mean? Coinbase is a web application. This means that your private keys are controlled by them. Private keys are exactly what they sound like. They are the digital equivalent to the key to your bank account. If Coinbase gets hacked all your coins will be stolen. Exchanges have been hacked before and will again… Look at Mt. Gox, Blackwallet, Bitthumb, Coincheck, etc….

There are a number of ways to store cryptocurrency in a manner where your private keys are not controlled by someone else. You can install a piece of software on a computer you control, you can store them in what’s called a hardware wallet, and it’s even possible to store them on a piece of paper.

Here is some information about some various ways to store cryptocurrency:

You can download and install a piece of software on a computer you control to interact with your wallet. For example, for Bitcoin there is Bitcoin Core software. This is what is known as a “full node” meaning that it downloads the entire blockchain to your system and operates as a node on the Bitcoin network. Having your wallet local to your computer system using the Bitcoin Core wallet means that your private keys are in your control and not on a third-party exchange. The main problem though is that this requires a lot of storage space for the blockchain (currently over 145 GB!). Another issue with storing coins on a computer locally is that the computer you store them on is still potentially vulnerable to being hacked.

If you choose to use this method I recommend using a completely separate computer that is used for nothing other than to sync the blockchain and make transactions. This will limit your exposure to malware that could potentially steal your wallet. Additionally, make sure you encrypt your wallet with a strong passphrase that way in the event your wallet file is stolen it limits the possibility for an attacker to steal your coins. This can easily be done via the interface in Bitcoin Core. Lastly, if you choose to use this method make sure you backup your wallet file. Use an external drive to store your backed up wallet file offline in a secure location.

Keep in mind that the Bitcoin Core wallet only stores Bitcoin cryptocurrency. For other coins you would have to locate their full node software and perform a similar setup for each one.

Another method of storing your cryptocurrency is to use what is known as a hardware wallet. Hardware wallets are specially designed devices that store private keys on them. The private keys are meant to be kept on the devices alone and never touch a computer’s disk thereby limiting the risk of malware affecting them. There are two primary vendors of hardware wallets today: Ledger and Trezor. Ledger wallets and Trezor wallets are hardware devices that allow you to store your private keys on a device other than your computer. Each of these devices allow you to create a pin for accessing your wallets on the device. In order to interact with your coins both of these devices still require a piece of software in order to interact with your wallets. This could be in the form of a Chrome extension or desktop software. The devices are supposed to be able to validate the software is legitimate but there have been some issues with vulnerabilities here.

Each of these devices create a 24-word backup seed when you initially set them up. This seed is used to recover your wallets in the event that your device is lost or stolen. You could write down your seed, or you could opt for something a bit more solid so that in the event of a fire your seed isn’t destroyed. These devices aren’t perfect but are much less susceptible to malware attacks than if you were to store your wallet on your computer.

One important thing to note is that if you are going to purchase a hardware wallet make sure you are purchasing it direct from the vendor and not from a reseller on Ebay or Amazon. This helps limit your exposure to what is known as a “supply-chain attack”. There has been debate about whether this option is actually more secure than using a hardware wallet or not due to the fact you still have to generate the keys on a computer that is potentially prone to malware.

If you decide to go this route I’d recommend performing the following actions in order to minimize risk of having your private keys stolen: *Psst* If you liked this blog, we think you’d enjoy Beau’s class:

The Hard Part of the Alphabet New Toy Alert: A Quick Review of Keysy